CREATIVITY COMES FROM WITHIN: Gyotaku and Haiku 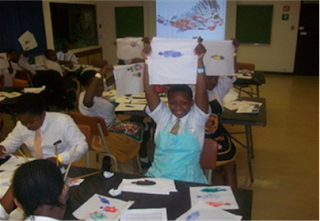 ‘ Gyotaku’  translated from the Japanese as ‘ fish printing’  is one of the popular workshops that learners enjoy as they dirty themselves doing fish prints and later recording their experiences in a form of poetry known as ‘Haiku’. Mbuqe Junior Secondary School is among the schools that came to this year’s Scifest workshop held at ‘Water World’ at SAIAB.  The workshop, facilitated by Vanessa Rouhani, allows participants to learn about the traditional Japanese art of fish printing.

Pupils  attending are accompanied by their teachers and are given a chance to make fish prints, which they seemed to enjoy very much. One of the learners said, “I want my fish to colour-block,” associating this with one of the latest fashion trends.

Mr Khabayi, a Natural Science teacher, said Scifest Africa provides educators with an opportunity to expose leaners to skills and careers and this encourages them to learn new things. “Where we come from we do not have labs - there are no resources, therefore festivals like Scifest come in handy because learners do not only see these things but get a chance to take part in them,” he said. Naledi Ngcangca said, “I was so excited to see fish and not only see it but paint it and touch it with my hands, even though it was dead.” Another pupil, Ndive Klaas, said, “I enjoyed being here because we were given a chance to draw, and this is cool.”
Commenting on this, Vanessa Rouhani, Water World co-ordinator said this year’s workshops went just as well as previous years; “The schools who visited from uMtata and Kimberly were very keen, they said they enjoyed this and it was nice to do something different, calm and peaceful.” Some of the learners said that Vanessa’s presentation before they started painting was useful as it gave them an idea of what they were to do.
When leaners finish their fish prints they are given a chance to record their experiences in a Japanese form of poetry known as Haiku. Haiku dates back to the 1400s. Traditional haiku focused on nature and the place of humans in nature, but in modern haiku any subject matter is considered suitable, whether related to nature, an urban setting, or even a technological context. A distinctive feature of haiku is its controlled form. Haiku can be combined with paintings, photographs and other art media. Kathleen Anne Bethune, in trying to capture her experience, wrote this poem;
“Where do we find this
A fish covered in bright paint
Soon becoming art
Fish so small, naked waiting and vulnerable, for me to capture
Small fish waiting on absorbent paper
Paint brushing picture…”

Penny Haworth, one of the workshop facilitators, says this was the first time the haiku component of the workshop has been offered during Scifest; previously workshops have been offered during the National School Festival and Word Fest during National Arts Festival; “What I really enjoyed is the participants’ reaction; when they had completed their fish prints they were provided with an opportunity to consolidate their experience and thoughts and actually write a poem about it,” she said. There were about 22 haiku poems written by the different participants during Scifest. In one voice they all agree that the experience was amazing and that they would like to come back next year.